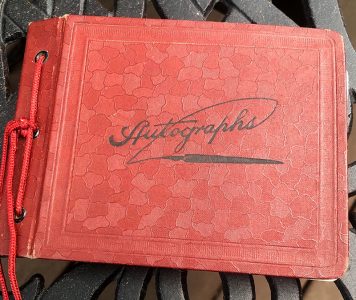 Some people are just drawn to artifacts of the past. Entire books have been written about ephemera found in someone else’s trash. So it was not a complete surprise when I received a message on Ancestry from a woman who had found an autograph album that originally belonged to a cousin of mine and dating from 1934. She told me she had found the album in a dumpster along with some other items in a bag. That she had looked up the name of the young woman whose album it was and found her in my family tree and would I be interested in receiving it. Of course I would!  A few days later, it showed up in the mail along with a beautiful and touching letter about how pleased she was to be able to reunite the album with its family. Autograph albums were apparently a popular keepsake item […]
Do you like it?1
0 Read more

My grandmother, Esther Kronenberg, is in the front row, the third on the left from the center gentleman in a dark suit. I’ve seen this photo 100 times. My dad put a sticky note with an arrow over the class, pointing to his mother’s head. Bronx High School, graduating class of 1922. Today was the first day I have really given some consideration to what that meant for her and her family. Esther was the first generation in her family born in the United States. She was born in 1904. Her father was a shoemaker from Koden Poland. My father told me that he was a learned man. Perhaps not formally educated, but always had his nose in a book. Esther’s mother Anna was a housewife, no education at all, guided by superstition and concern about the “evil eye.” According to my father, she was frequently found throwing away or […]
Do you like it?0
0 Read more 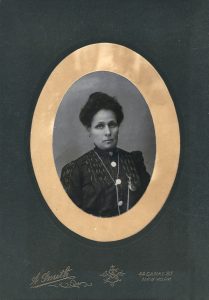 Oh my goodness. I keep meaning to post and I keep writing blog articles in my head and somehow a year has passed since I’ve written anything. As they say, “the road to hell is paved with good intentions!” I hope not, for my own sake. While social distancing, I have been continuing my project of re-scanning all my family photos, putting them into archival pages in an album and organizing the digital files with meta-tags so that everyone will be identified and put in the right family folders. I may have mentioned that I actually scanned all my family photos back in 2008. But at that time, I did the project for my parents and the goal was to just get them digitized. Now that my parents are gone, I’ve been able to go through the images, throw out the ones of stuff that have no import to the […]
Do you like it?0
2 Read more

Around 10 years ago, I scanned all of my parents’ photographs for them. It was a huge project which I did at my dad’s request. My company Legacy Multimedia was beginning to do some archival projects and I wanted to do this for my parents but also as a way of experimenting with different scanning and archiving techniques as I worked out a process for clients. And I did it all wrong. I’m not going to go into the list of mistakes that I made but there were many. Over time, I organized and re-organized the structure of the archive and at one point, had one of my employees work on it for a few weeks; sorting out duplicates, and breaking up some photos that were in large page scans. What I meant to do was to sit down and finally get everything sorted out correctly, re-scan the badly scanned […]
Do you like it?4
2 Read more