I started working on my Ilkovics line in earnest in February of 2018. Prior to that, I knew my maiden name Elkort had been changed from Ilkovics some time in 1920s or 1930s by my grandfather’s family. Nobody who is currently alive seems to know the exact details of this name change or when it took place but my great-grandfather Herman was buried as Herman Ilkovics in 1939 although my father was born in 1929 as an Elkort. I also knew that Herman had a brother named Adolf. I had seen some entries on genealogy websites of people looking for relatives of Moritz and Adolf Ilkovics but had been unable to connect to the senders as by the time I found these entries, years had passed since they had posted.

Fast forward to February of 2018 when I found a researcher on JewishGen.org looking for Ilkovics family from Košice in what is now Slovakia. To make a long story short, I connected to a new cousin whose grandmother Ilona Ilkovics, was sisters with Szerena Ilkovics, who had been married to Adolf Ilkovics. She in turn connected me to the three grandchildren of Adolf who had also changed their surname, but to Ilko, and were living in the San Diego area. At one point, my grandfather Louis Elkort, and his first cousin Alexander Ilko, were living some 100 miles from each other for many years and didn’t know it. How amazed they would have been to have learned about each other!

I started working at building my tree and in March, hired a researcher in Slovakia to help me find the records and connect all the people together. Over the course of 6 months he travelled all over the countryside and found numerous records, more than I thought we would find, and began helping me put together not only the tree, but the story of this family.

The story basically starts with my 2nd great-grandfather, Samuel Ilkovics. He was born around 1839 in Tokajik, a small town in the Prešov region of what is now Eastern Slovakia, but at the time, part of Hungary. This area is nestled into the mountainous landscape at the foothills of the Tatra mountain range. His father was Israel Ilkovics and his mother was Zartl Landsmann. I have not been able to find out much about Samuel, what he did for a living and why he moved around as much as he did. Sometime prior to 1866, he married his first wife Ester Weisz. She was from the nearby town of Varannohossumezö and was born sometime around 1841. Her parents were Hersko and Leah Weisz. It’s difficult to know much about their life from that time period but most likely theirs was an arranged marriage, as was the custom at the time.

In 1866, Samu ( as he was referred to on many documents) and Ester gave birth to their first child, Moricz Ilkovics who was commonly referred to as Mor. Learn more about Mor and his family. 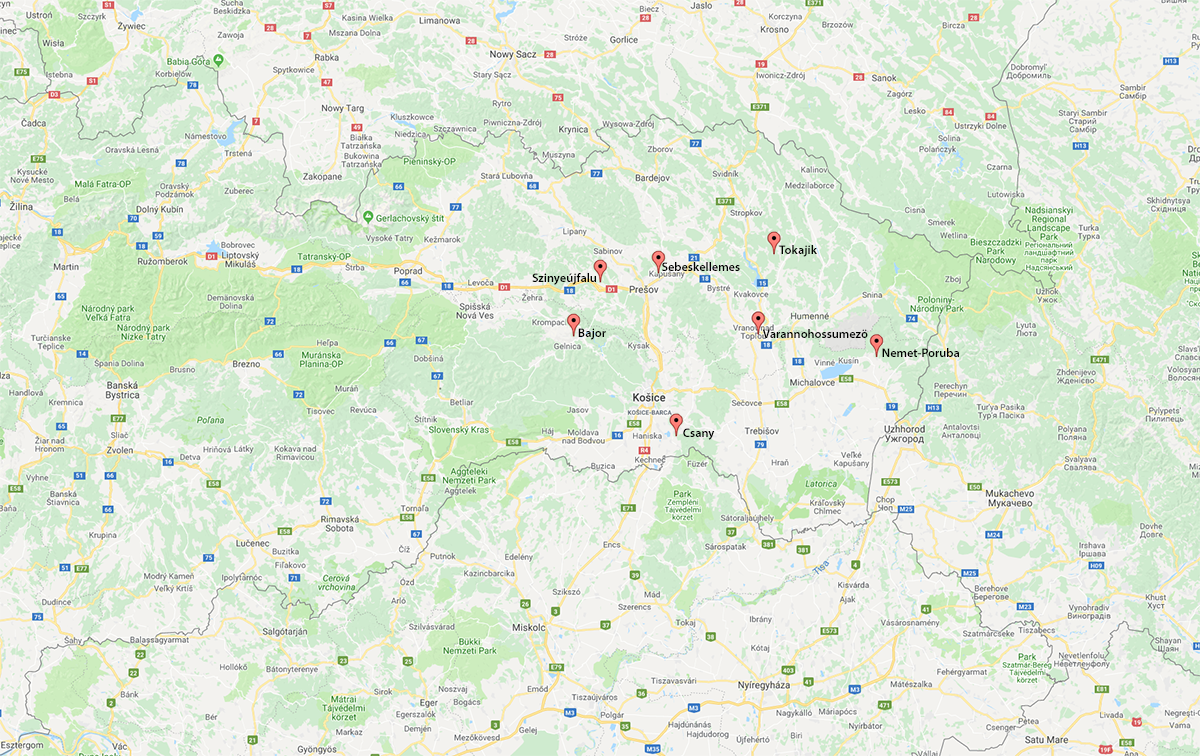 Then on 28 September 1870, they had their second son, Adolf Ilkovics. He was born in Sebeskellemes, which at the time was a blending of the towns Sebes and Kellemes but is now Šarišské Lúky. Learn about Adolf and his family.

When Adolf was 1 year old and his brother Mor was 5, their mother Ester died on the 15th of October, 1871 while they were still living in Sebeskellemes. There’s no information about the cause on her death record and I have not found her grave. There was a smallpox epidemic in Eastern Europe during that time,  but it could have been a number of other illnesses that were common.

Her death left Samu with an infant and a toddler, a difficult position to be in at that time. He probably needed a wife pretty quickly but he was also living at a time where extended families were common so it would be safe to assume that Ester’s family helped care for the two small boys.

Sometime prior to 1875, he was introduced to my 2nd-great-grandmother, Kati Spiro. Kati was from Csany and I have no clue when she was born or who her parents were. Spiro is a common name in many parts of Hungary but not in this area they had been living. She was from “the south” and again, perhaps their marriage was the result of a Shidduch.

My great-grandfather Herman Ilkovics was their first child. He was born in Sebeskellemes on 11 October, 1875. Learn more about Herman (and my immediate family).

Samu and Kati went on to have a total of 11 children together. Sadly, most of them died in infancy. When Herman was 3, his sister Geza Gyula was born in 1878 in Szinyeújfalu. I’m not sure what they were doing over there but Geza died in 1882 at the age of 4 back in Sebeskellemes, the place they seemed to live in the most. Their next daughter was Regi, born in 1880 and she died at the age of 3. Their third daughter Mari was born 3 December, 1883, only two days after her sister Regi died. Fortunately, Mari survived her childhood but sadly died in the Holocaust. Learn more about Mari and her family.

They had another daughter Esti who was born 24 May 1885. I have absolutely no information about her fate in life. (If anyone reading this is descended from her, please let me know.) After Esti came Etelka born 30 April 1887. Etelka went by Ethel in the US, married William Korn, had several children and lived in the NY area. My dad grew up with children of their son Alexander Korn although I never knew that Ethel was an Ilkovics until late 2018.  After Esti came Fani who died at birth in 1887. Lina Ilkovics, born 17 September, 1888 in Sebeskellemes is another mystery 2nd great-aunt. A son, Ignatz was born 5 March 1890 and died pretty much one year later. And finally, their last child Betti Ilkovics was born in Bajor on 21 January, 1892. Betti is another mystery. There were a couple of Betti Ilkovics and one was the office manager for Mor Ilkovics. Was she this Betti? I don’t know.

I have found nothing about when either Samu or Kati died. I doubt either one made it to the Holocaust. They would have been in their 90s by that point, and while technically that was possible, it’s highly unlikely. Particularly for a woman who had given birth to so many children. I can’t imagine what sadness dwelt in her heart at the loss of so many of her babies. Her eldest son Herman, my great-grandfather, left for America at the age of 16, leaving her family to deal with all the heartache that followed.

One thing that is quite a mystery to me is that when I found the descendants of both Mor and Adolf, they had never been told about other siblings. They didn’t know about Herman, or Mari or any of the other children that followed after. It was quite possible that when Samu took a new wife, she didn’t want anything to do with his previous children and they were raised by Ester’s family, the two families remaining separate. I have heard from other researchers that this phenomenon existed during that time period. And of course, there’s no one left to explain what happened back then. We can only guess.

When I started doing genealogy research, my cousin Randy told me that it was told that Herman was a Greek Orthodox from Serbia whose brother was a priest.  That Herman had married my great-grandmother Rosalie and either converted to or raised the family as Jewish. When I began DNA testing, we quickly blew a hole in that story as all the cousins tested primarily as Ashkenazi Jewish DNA. Then I found Herman’s birth record and it had the name of the Mohel listed. His immigration papers also said he spoke Yiddish. How many Greek Orthodox men are circumcised and speak Yiddish? Later when I connected with the Ilko family, two cousins told me that same story, but that supposedly it was back several generations. That the origin of the Ilkovics Jewish line was from that one Greek Orthodox man who married a Jewish woman, but nobody knew who that was or how far back it went. Since it was descended from the male line, I decided to do some detective work. There are many Greek Orthodox Ilkovics still living in Hungary, very close to where our family came from. I found a couple of them and convinced one of them to do a Y-DNA test. If we were both descended from this same line, then theoretically his Y would match that of my father’s. (If you’re not familiar with the Y-DNA, it is passed down from father to son to son to son and so on ad infinitum.) Well after patiently waiting several months, we got the DNA test results, no match. The Greek Orthodox’s DNA showed to be 62% Eastern European and around 37% British Isles. My father’s Y-DNA is 94% Jewish Diaspora with his Y originating around 1000 years ago in the Middle East, possibly Turkey. (More research is being done on that line.) So that leaves me wondering, where did this story come from and how did it end up being passed down in at least 3 different branches of Ilkovics descendants.