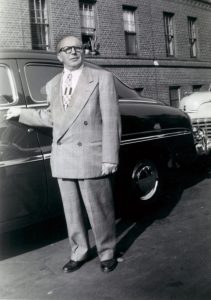 My mother’s father was Harry Spiel. He died when I was 13 but I got to know him pretty well as he and his wife Minnie moved to Los Angeles in the early 1960s from Brooklyn to live by our family.

I remember visiting them in their little apartment in Coney Island when I was young and before they moved to California. Harry worked in a laundry. I’m not sure if he owned it or just worked there but he spent his days washing and ironing other people’s laundry. It can’t have been an easy life but he was always a cheerful man. His mother tongue was Yiddish and Russian, and he was never great with the English language. He always had a cigar in either his hand or his mouth, and it often wasn’t lit. My cousins and I remember him handing out cigar bands to us, so there must have been a lot of cigars! 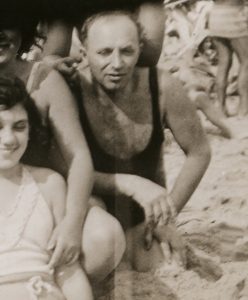 Harry in his bathing suit

I have a vague memory of a visit we made to Coney Island when I was a young girl. We went to the beach and Harry swam out very far. All I could see was his head bobbing out on the horizon for a very long time. Finally he swam back in and joined us on the sand. It was winter and the rest of us didn’t swim. I remember later my mother telling me he was a member of the “Polar Bear Club,” which was a group of people who swim every Sunday from November through April. I was always impressed with that fact and during my lifetime, have always thought of him when I’ve heard of others doing winter swimming. The fact that he was 4’ 10” didn’t seem to affect that. He was also extremely adept at doing the Hopak, a Ukrainian folk dance, otherwise referred to as the Russian Squat Dance. You basically squat down and then alternate kicking out each leg. I remember seeing him at my uncle’s wedding out on the dance floor doing this dance. Try it, it’s incredibly hard. He was also a huge Dodgers fan and it worked out very nicely when he moved to Los Angeles after the Dodgers left Brooklyn for Los Angeles in 1958. We took him to several games when I was little and he always wore his Dodgers hat. When we brought him home after the game, he would repeatedly tell us “tank you, tank you, tank you” in his heavily Russian accented English.

Harry Spiel, was born somewhere in the Podolia region of Russia, supposedly on the 17th of March 1888. My mother told me that he didn’t know his birth date so he chose St. Patrick’s Day because it seemed like a fun day to have your birthday on. I have yet to find a birth record for him so, it’s either the truth or a great story. His death record listed him as being born in 1890 but I’m sure that was my grandmother’s guess and I don’t think it was correct since his brother Morris was born in 1889 and Morris was the younger of the two.

The story I heard growing up was that Harry stowed away on a ship coming to America at the age of 16. Like numerous other young Jews, he left his entire family behind seeking a new life in America. For the longest time, I could never find him on a Passenger List and thought there might be truth to this story. I did eventually find a record for a Hersch Naftulischen, traveling from Hamburg to New York in 1905. How did I know this was my Harry? 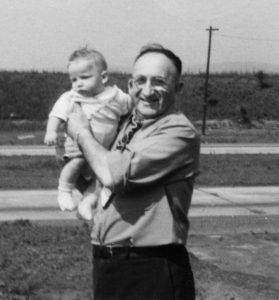 First off, Harry is an anglicized form of Hersch, what his Russian name would have been. Second, during that time period, you had to have a sponsor in America when you came over. The sponsor listed for Hersch N was Schmiel (or Samuel) Spiel listed at an address where Harry had lived with Samuel later on so I knew this was my Harry. It seems that rather than being a stowaway, he was merely traveling on someone else’s ticket. Samuel was Harry’s father’s name but this Samuel was a cousin and they all ended up living in Boston, including Morris.

Morris Spiel, a year younger than Harry, was born on October 22, 1889. Their parents were Samuel Spiel and Tily Tarla. I have not been able to find any information about them but I am working on it. Tily’s name was written as Tillie Tarley on documents which sounds more Irish than Russian but there are numerous records  Tarla in the Bar area.

Morris came to the US in 1907,  just like his big brother Harry, at the age of 17. He was detained at Ellis Island for six days, then released to the Hebrew Society, possibly when his brother did not come from Boston to retrieve him.

Given the ages of Harry and Morris, the fact that they came by themselves, and the time period they immigrated, the Russian Revolution of 1905 had already begun and life for Jews was more precarious than ever. They were of the age of mandatory conscription into the army and with growing antisemitism against Jewish soldiers, their fate rested on freedom to the United States.

The two brothers settled in the Boston area, often living together with their cousin Samuel until Morris married Eva Donicosky in 1912, settled in Revere, and had their first child, Sara Clare, in 1913. Their second son, Sidney Spiel was born in 1917. Read more about Sidney. Morris and his family changed the spelling of their last name to Speil, reversing the i and e, although both Morris and his wife Eva died with both death records and grave stones reflecting the original spelling of Spiel. His descendants have kept the Speil spelling.

I don’t really know how my grandfather Harry met my grandmother Minnie and ended up living in Brooklyn. He is listed in the New York City Marriage Indexes as marrying in 1920 in New York City but a marriage license has yet to be found. 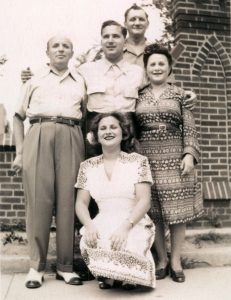 Harry and Minnie Spiel with their 2 children and a neighbor.

Various records for both Harry and Morris indicate they came from Bar Podolia. Bar is a town in the current country of Ukraine located 50 miles NE of Kamanets. There are not a lot of records available for Bar so a couple years ago I took on the task of building a Bar KehilaLinks page for JewishGen. Feel free to take a look at it and learn more. Recently I started a project to locate and translate archive documents from Bar and continue to raise funds to  translate documents coming out of the archives there. If you’re inclined to donate, please visit the JewishGen Ukraine projects donations page and scroll down to the third project, Bar Ukraine Records Project. No donation is too small and please let me know if you do donate so that I can thank you. Samuel (Shmeil) Spiel, cousin to Harry and Morris, was born in 1869 somewhere in Podolsk. He arrived in the Boston area in 1904 after his sister Rivka and her husband Aaron David Wasserman arrived in 1888. Both Samuel and Rivka (Rebecca) built large families whose descendants went on to advanced education and successful careers.

In 2021, while randomly looking for photographs of the area on Yad Vashem’s website, I stumbled across a survivor testimonial from a Vladimir Eftor. Vladimir was a small boy when the beginnings of the Holocaust began to rumble through his little town of Verkhivka, which happens to be about 10 miles from Bar. Vladimir’s mother was a Chaika Shpil from Verkhivka. Sadly, Vladimir’s parents and young brother were killed in the ghettos but Vladimir and his brother Ilya both survived although it was another 30 years before they would be reunited. The Shpil family is a small one with members living in Russia and Israel but the minute I saw photos of them, the Shpil / Spiel family resemblance was remarkable.