About Stefani Elkort Twyford – A Storyteller

Like many people, I came to what I do now via a zig-zag pattern of different careers and skills. I started out with degrees in Social Work and Psychology and wanted to make a difference in the world. Sadly for the world, I didn’t enjoy the bureaucracy of the jobs I found myself in and moved on. After some time raising my family and a few other career options, I came into filmmaking from an unusual angle.

I saw us moving further and further into a digital world. I also saw that our pasts were sitting in shoe boxes under the beds or decaying in those bad glue photo albums so popular for many years. I believed there was a need for a business model to help people digitize their photos and memorabilia and safely store the originals in archival storage that would mitigate further decay. With a friend I started Legacy Multimedia in early 2002 as a way to address that. Over the first few years, our clients expressed a need to tell the stories of their families along with all these photos and mementos they had accumulated. So we started offering video biography services. I don’t suppose I saw it at the time but all those skills that I learned from my degrees came into play as I helped people articulate who they were in a way that educated and inspired future generations of their families. And that truly did make a difference in the world 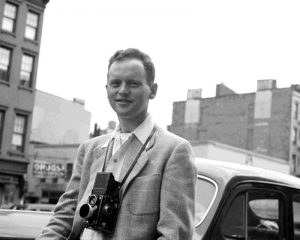 Martin Elkort looking for the perfect photo in 1947.

My father, Martin Elkort, had been a street photographer in New York City during the late 1940s to early 1950s. I didn’t really know much about this aspect of him growing up as he gave up on it in order to support his new family. In the late 1990s, a growing interest formed in the late New York Photo League, of which he had been a member. Books were written along with retrospective museum and gallery exhibits. Suddenly his photography became a “hot thing” and it breathed excitement into his retirement years. He began shooting photos again, speaking and mentoring other photographers. It was an exciting time for him and I began to learn more about his work. Later, as he became more elderly, I took over managing his photography archives. In 2012 I began working on a documentary about his life and work. This video was completed in 2014 and had showings at several museums and galleries and is now available online to view.

While working on the documentary, I saw similarities in the way my father viewed people through his lens and the way I helped people through the biographies I created. We were storytellers, and helped articulate who we are in the world by the way we showed who others are through our lens. 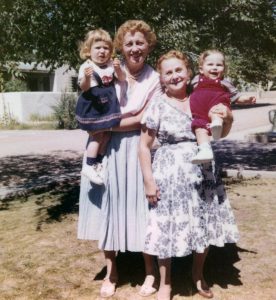 Stefani and her brother with both of their grandmothers.

Today, some 70 years after many of his photos were shot, his work resonates with so many because it shows not only a world that no longer exists, but a way of life that many of our parents and grandparents grew up in. Life in a city of immigrants taken in by Lady Liberty, and given a chance to create a meaningful future for themselves and their families.

Like many American Jews of my generation, I grew up disconnected from the Holocaust. Because all four of my grandparents came to or were born in this country prior to WWI, our families lived in a paradigm where the atrocities that had been committed in Europe didn’t have much to do with us. But as I started the journey into genealogy, I knew I would find these relatives; siblings, aunts, uncles and cousins of my great-grandparents who had their lives and their futures stolen away from them. And along with new branches of living cousins, I have added more Yad Vashem testimonials to my family tree than I care to count. I am related to each of them and by telling their stories here, I honor them by restoring their memory and showing they are not forgotten.